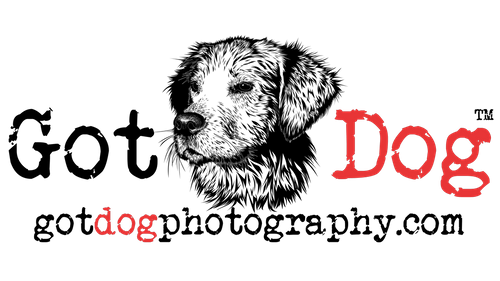 He is the dog.

the one that truly was my "soul mate dog".

He is the dog that has crossed my mind every day since his death.

He is the reason "GotDog Photography" was born.

It wasn't really noticeable in the beginning that he was something special of course. Just your super cute and cuddly Golden Retriever puppy! I mean seriously, everyone loves a fluffy chubby little pup like that right?! But as the first few years flew by, I realized he was above and beyond. The perfect and constant companion, he was a kind and generous soul to all he encountered.

And so began his foray into learning to become a therapy dog. There was just one teeny little issue....Grissom was absolutely terrified of anything with wheels! So a wheelchair, a walker, anything out of the ordinary that he saw as a strange extension of a person, and he was out! Around this time I ended up having an injury and myself ended up in a wheelchair, and then with a scooter type device for my leg. It was only then, in order to get to me, that he sucked it up and pulled on his brave heart to get near me.

Unfortunately, I was worried that he would not be able to overcome that fear in an actual therapy dog environment. He would have so rocked at that job though!

So we moved on to the idea of learning to be "search and rescue"! Which he also took to like a champ! He just was so darn smart, so fast, and with the most powerful nose, eyes, and ears!

Unfortunately around this time he started to show some signs of being a little hurt. At first we were told probably just some early arthritis. But he was my best friend, and I didn't want to chance causing him any pain, so I forgot about search and rescue, and we took to gentle and fun walks around the neighborhood, playing fetch with a tennis ball, and in general just hanging out and riding around in the car (always a favorite of his)!

The people and lives he touched along the way are just too numerous to even go into, but guys, like I said, he was just something special.

He may be gone, but he is not forgotten. It has been almost 5 years as I write this today, and he has crossed my mind every day since his death. He is the first reason among many that I wanted to build a studio and a brand devoted entirely to dog photography and the art of capturing your beloved pet at whatever stage of life he/she is in at the moment you come in to see me!

And lastly, Grissom loved ALL ANIMALS....dogs, cats, squirrels, bunnies, horses, cows, pigs....ALL! His motto would have surely been.... Tell Me Your Story

I would love to hear your story about your beloved pet! Send me an email if you wish, and I promise I will read it! And respond! Oh, and also, I'm not a stalker weirdo, so you don't have to worry about me selling your email address, or spamming you with other useless nonsense!

Tell Me Your Story